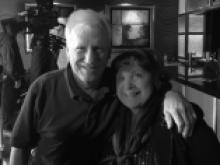 The New Year had gotten off to a good start; an eclectic group of business and public service projects was on the boards. And then came an offer Wendeen could not refuse; an invitation to participate in a live poker game to be televised on CBS Sports.

The player roster was as eclectic as any she had ever seen; lawyers, poker pros, a movie reviewer, and James Woods, the MIT educated actor, were on the list.

Some 15 Years ago Wendeen and Jimmy struck up an acquaintanceship at a poker tournament in California, each intrigued by the other’s connection to NYC Mayor Rudy Giuliani. Jimmy had played Rudy in the movie of the same name. Wendeen had played a role in Giuliani’s run for Mayor and had served as a special advisor to him on City Hall Affairs.

The years flew by with occasional crossing of paths, a dinner here a poker date there. But in the upcoming Poker Night In America show they sit next to each other for most of the day–hemming and hawing about their respective holdings and mugging for the camera as reacquainted friends.