Wendeen Eolis uses her early exposure and varied experience as a political advisor and as a government advisor and official to provide attendees at her speaking engagements powerful crib notes for dealing with bureaucrats- in and out of government.

She was introduced to politics and government by her father, who lived to see Wendeen take on significant roles in public service-- as an advisor to Mayor Rudy Giuliani, Governor George Pataki, and federal agency heads and government officials around the country and overseas.

During her childhood, Wendeen's father (by his adoption of her and a sister) was a senior government official in New York State.

Wendeen's interest in public service was further stoked in her role as president of a trade Association,  interacting with state legislators in the mid-seventies.  Then, a chance meeting with Rudy Giuliani, in 1978, led to a long friendship and working relationship that resulted in her substantial involvement as a sounding board and advisor in city government affairs during the early period of his Mayoralty.

But, it was Wendeen's longtime friend, Maureen Reagan, who encouraged Wendeen to take a giant step when gubernatorial candidate George Pataki came knocking at her door. Already experienced as a senior confidante to the Mayor, Wendeen became a senior advisor and first assistant to Pataki, the unlikely candidate for governor--joining his administration formally as a confidante  and independent thinker with a portfolio that emphasized "hot potato" issues.   While part of the Pataki administration, Wendeen united with Maureen and traveled with her to the Middle East in 1995, following the assassination of Yitzhak Rabin. She looked upon her friend's acceptance of the invitation during the sunset of her life with great admiration.

HCTF: Initiated with a Sense of Duty

In the immediate days after of 9.11, Wendeen headed to downtown Manhattan to volunteer her services, a natural inclination that joined her sense of duty with more personal concerns for displaced lawyers and businesses in Lower Manhattan, as they assessed their options; residence and career relocations, and management of their legal affairs. 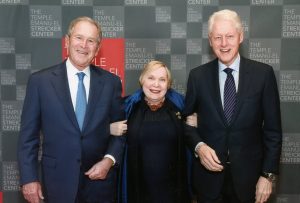 Following President George W. Bush's visit to New York, Wendeen brought her knowledge of the legal profession and her growing expertise as a due diligence expert in government assignments to the table. She began to recruit and  vet lawyers and law firms for disaster recovery legal matters . Her legal consultancy provided pro bono executive counseling and attorney/law firm recommendations to businesses damaged or destroyed in downtown Manhattan.

Eager to refine her increasingly unique understanding of the types of legal issues that arise in the face of catastrophic events, she traveled overseas visiting hotbeds of terrorism in the United Kingdom, Israel, and India among others, and grew her contacts in government and the worldwide legal marketplace. l profession  law,

In 2002, following the death of her father, she converted her post 9/11 volunteer assistance- a legal affairs crisis counseling program, to a formalized role; engaged as the steward of legal affairs crisis counseling and attorney and counsel vetting services; she worked closely with high-level government officials. Today HCTF focuses on securing highly specialized legal talent and law firm counsel for top-level government appointments and on special attorney and law firm vetting assignments in the aftermath of incidents of violence and natural disasters.

During the Obama era, Hope's Champion Task Force grew its expertise and global operations; assisting governments and citizens in America, American allies, and friends of America--around the world -- frequently on overseas soil. She treats this work as a labor of love and a tribute to her father's nearly lifelong commitment to public service. Wendeen's commitment to these activities is as important to her as her commercial endeavors.

Wendeen served as an adviser to Rudy Giuliani in his transitions back and forth between private sector practice and public service for 15 + years, notably including his long-range assessment of alternatives, prior to leaving his position as the US Attorney (SDNY), in 1989. She was a member of his inner circle during his first two mayoralty campaigns. Prior to his taking office , Wendeen was on his Mayoral transition team. During his first year in office, Wendeen was a special advisor on City Hall operations and  communications and spearheaded an evaluation and review of the City's Law Department and enjoyed the celebration of a milestone birthday dinner with Mayor Rudy and mutual City Hall friends.

Wendeen has a New York State of Mind!

Wendeen went on to become  a special advisor to George Pataki, shortly before his New York State gubernatorial victory. She joined his administration as first  assistant and senior advisor in 1995, as a confidante and independent thinker who took meetings with the Governor and on his behalf with legislators and external civic and corporate leaders. Her special projects included hot potato issues including Indian casino affairs and rent de-regulation. She also collaborated with other senior members of the Administration, including the Chairman of the Empire State Development Corporation ,Ambassador Charles Gargano. She has since served, intermittently, as a special advisor to senior officials and numerous government agencies in the State of New York.

A highly experienced vetting professional and seasoned crisis consultant, Wendeen Eolis has evaluated lawyers for high level roles in the administrations of six American presidents--covering both sides of the aisle.