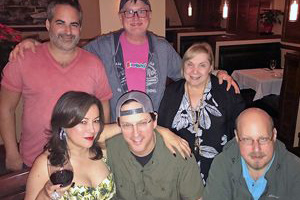 (Fort Lauderdale, FL) After racking up our chips, we called it a day on the set of Poker Night in America, the poker reality show that airs on the CBS Sports Network. The high-stakes competitions showcase poker skills, lucky streaks, gambling styles, grit and gab.

To my left, at the poker table was the handsome sharp-as -a-tack, poker genius, Doug Polk. He bought into the game with an intimidating $100,000. To my right was semi-pro Avi Freedman; he’s been killing the game of late. He brought out a bankroll of $30,000. Across the table were poker millionaires Frank Kassela and Shaun Deeb. Kassela is part of the rarified club of poker players that have scored a hat trick at the Annual World Series of Poker Tournament. Shaun Deeb has needles at the ready to insert under the skin of players that takes him on.

My 5K buy-in was the minimum stack permitted; I had another 5K in my pocket, if needed–compliments of my silent corporate sponsor. I like having a chance to decimate the competition with fewer bullets, but between the talent and the mega buy-ins all around me, I had no intention of coming up with more money against this crowd! I was committed to one strategy in this spot–disciplined aggression. It was my best hope with a pittance. At the end of play, I was down a few pennies, but I was up for a night on the town!

Led by high stakes player and poker talent scout Matt Glantz, a group of us hit the cocktail lounge to down shots or sip sodas before moving onward for more post-combat camaraderie. Poker Night regulars Jennifer Tilly and her long-time boy-friend Phil Laak (better known in poker circles as the Unabomber), had been occupied in the commentator booth all afternoon; they joined us. Prancing in stilettos and sneakers, respectively, Jen the only Academy award nominee who has won a World Series of Poker championship (Ladies Event) and Phil, also a WSOP champ (in an open event and Oscar worthy poker celebrity, hoofed it with us to the parking lot. We took off in two cars for the best stone crabs in town.

A rehash of the day’s events was quick and pointed at the dinner table. Big stacks dominated. Jen (the glamorous chatterbox) and Phil (the unpredictable eccentric) held court with style; they were witty, smart, gregarious, and completely engaged with each other–and with the rest of us during our nearly three-hour dinner. They provided plenty of laughable moments, but it was I who enjoyed the last laugh, thanks to this generous couple.

At the end of dinner, we played “credit card roulette for the check. By a process of elimination in this numbers game, the wheel of fortune was about to point the check either on Jennifer or me. Suddenly the game came to a halt. Jen looked coquettishly at Phil as he announced, “Jen, Wendeen, this check belongs to me! Thank you Jen and Phil.